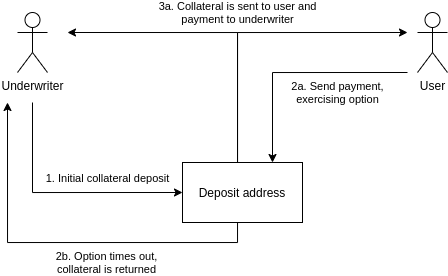 Trading of bitcoin derivatives is a huge market nowadays. However, all of it occurs on centralized exchanges with large legal & technical risks that require trust in their operators, thus betraying the philosophy of Bitcoin. The protocol presented here enables the creation and redemption of trustless options on the Bitcoin network.

As it is, this protocol requires locking 100% of the collateral for as long as the option stays in effect, but it would also be possible to reduce the capital requirement quite substantially by changing the protocol to make the underwriter lock only 30-50% initially and, at option expiration, make it provide the rest of the payment in case the user decides to exercise the option. More concretely, this new protocol would look like:

As you have probably already noticed, the downside of this system is that it would require an external oracle along with a re-balancing mechanism to prevent situations where losing the initial deposit is the rational choice for underwriters. Furthemore, it would introduce the assumption that price must not change by over X% within a pre-defined timespan.

[1] The USDT available on OmniLayer wouldn’t work for this, since OmniLayer only uses BTC transactions for serialization and propagation (the payload is encoded in the txs in a way that is invisible to BTC nodes) so it won’t be possible to apply BTC’s script to these, instead, some sort of USD colored coin needs to be used.